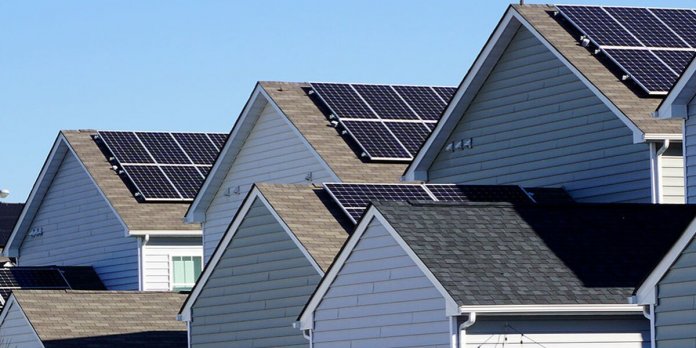 A chicken in every pot, a car in every garage — and a solar panel for every roof?

For many years, that notion would have been unthinkable in Virginia, where fairly competitive electric rates, a lack of incentives and what one solar developer described as “extreme utility control of the legislature” made most companies think twice before putting down stakes.

“We fondly referred to Virginia as the dark state,” said the same developer, Tony Smith of Staunton-based solar company Secure Futures Solar. “We always thought if we could succeed in Virginia, we could succeed anywhere.”

Now, however, that’s all changed. A flood of legislation easing barriers for residents to put solar on their own roofs and in their own backyard has led to what installers, developers and trade organizations describe as a sudden rush of interest in the commonwealth.

“Virginia is kind of like the Wild West,” said Nolie Diakoulas of Virginia Beach-based installation company Convert Solar, which has been in business since 2012. Now national companies, he added, are “coming in and knocking on the doors and spreading the good word of solar.”

“Other markets have historically had much more robust incentives for solar,” he said. “I think part of the advantage Virginia has is it’s been untapped for a little bit. It’s had such a tough market, especially for distributed generation.”

While the massive utility-scale farms cropping up in the state’s more rural areas might be the most visible aspect of Virginia’s shift to solar, new state laws have carved out a special role in Virginia’s clean energy transition for a different application of the technology.

“Distributed generation” is the term used by industry players to refer to any kind of electric power that’s produced outside of large traditional plants. But while the definition applies as much to the propane-fueled backup generators used by businesses as it does to renewables, in Virginia energy policy right now, it means one thing: rooftop solar.

Solar panels designed to be mounted on a single-family residence’s roof have been around for decades. As technology has improved and prices have dropped, however, rooftop solar has increasingly come to be seen as a disruptive influence. When it comes to the electric grid, wind and utility-scale solar fill a similar space as gas and coal plants: large hubs where energy is produced at a central location and then sent down transmission lines to substations and eventually people’s homes.

Rooftop solar, though, offers a fundamentally new framework for power generation, one in which thousands of locations are producing energy at any given moment. In this more decentralized vision of the electric grid, large-scale power plants don’t disappear, but their importance is tempered.

For utilities like Dominion Energy and Appalachian Power Company, which long balked at the idea of widespread distributed solar, the rise of this form of energy will require close examination of the distribution and transmission systems that carry power around the state.

“If the distribution system’s not working, the rest of the stuff isn’t working either,” said Dominion Senior Vice President of Corporate Affairs and Communications Bill Murray. But it will also raise important questions for policymakers grappling with what a 21st century electric grid should look like.

Gov. Ralph Northam’s September 2019 executive order committing Virginia to a carbon-free electric grid by 2050 laid down a firm target, but “what does that mean?” asked Aaron Sutch, the Virginia program director for solar advocacy nonprofit Solar United Neighbors. “Does that mean that big utilities and big-scale utility solar and wind do that transition? Or does it put the power, as it were, in people’s hands?”

More simply, he asked, “If it’s all large-scale centralized, are those benefits really going to trickle down to the community?”